[Another version of this story first appeared on Earth Touch News, 15 January 2015.]

In the Bangladesh Sundarbans mangrove forests, villagers shout in alarm. A tiger has entered their village. A group of men, armed with long, thick sticks, converge upon the intruder. They raise the sticks and beat the ground, creating a ruckus that drives the tiger back into the forest—a benevolent end to a potentially lethal encounter.

Members of the Village Tiger Response Team training to scare tigers out of villages.

The Sundarbans is the world’s largest mangrove forest. About 350,000 villagers live off the forests for resources like honey, shrimp fry and shells. An estimated couple of hundreds of tigers roam the forests too. Not surprisingly, the Sundarbans is gunpowder keg of human-tiger conflict: between 1881-2006, more than three thousand humans and one thousand tigers died in conflict. Livestock losses were unrecorded. 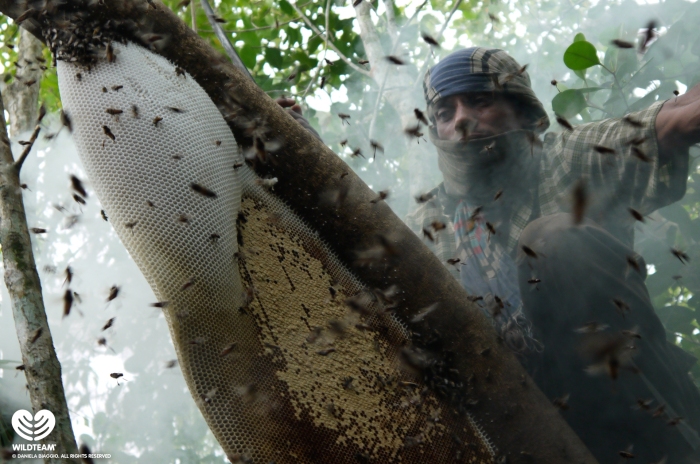 Many villagers make a living from gathering honey of wild bees in the Sundarbans. [credit: Daniela Biaggio]

Although casualties have eased, up till five years ago—before the villagers learned to chase tigers away—tigers entering a village still tended to start a bloody mess. Men would surround the tiger and beat or hang it to death. Between 1991-2000, human-tiger confrontations in Sundarbans villages killed three villagers and up to three tigers every year.

In the Sundarbans where tigers have robbed many of family or property, vengeful communities might have relished the chance to kill a tiger that is found vulnerable in a village. Yet, villagers did not kill tigers out of hatred. A recent survey of villagers, including those who had been inflicted by tigers, revealed retaliation as a weak motivation for killing tigers. The survey was conducted by scientists from University of Kent and WildTeam, a NGO that works to conserve tigers in the Sundarbans.

Instead, locals revere the tigers. “Universally, if you ask the villagers what they think of the tigers,” says Dr. Adam Barlow, a member of the WildTeam who was not involved in the survey “they would say that the tigers are the ‘Guardians of the Forests’, that without the tigers there would be no forests.”

Barlow explained that villagers kill an intruding tiger largely because they knew not how else to respond. Sometimes, men would also partake in the violence for fear of being branded cowards otherwise.

A few years ago, the WildTeam cooperated with the Bangladesh Forest Department on an unconventional approach to mitigate the human-tiger conflict in the Sundarbans. They recruited villager volunteers into Village Tiger Response Teams and trained them to deal with tiger encounters. When a tiger is spotted, the teams would alarm the villagers, keep the crowd away from the tiger, and either—beating the ground with sticks and shouting—chase the tiger into the forest or call for a Specialized Team to tranquilize and relocate the tiger. 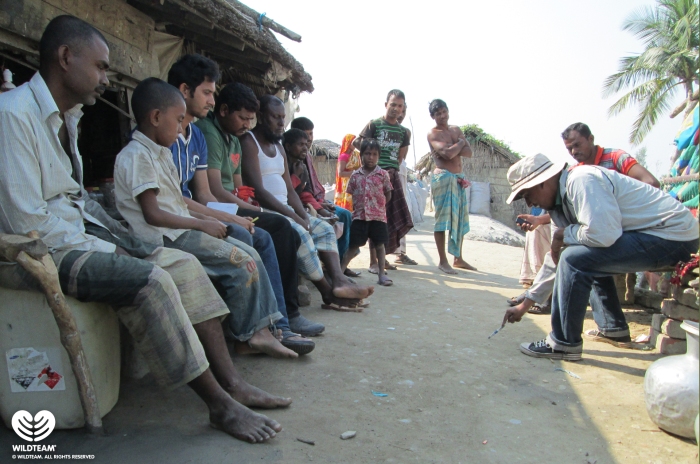 WildTeam discussing human-tiger conflicts with locals in the Sundarbans.

The Response Teams delivered. In the last two years, no tiger was killed in villages. Early doubts of the approach gave way to warm reception that snowballed as village by village achieved success and volunteered to form their own teams. There are now 49 Response Teams, and counting.

Empowering the locals with the skills, equipment, and most importantly the responsibility to protect themselves and the tigers they love, is proving to be an excellent solution for both humans and wildlife in the Sundarbans. The teams take pride in their roles, and have even extended their services to manage other wildlife like pythons.

“Once the villagers own the conservation,” says Barlow “they do really extraordinary and exciting things that you never even dreamt of.”

He relates the story of a Response Team whose leader was killed on duty by a tiger. Barlow had feared that the blow would have broken the team’s resolve to save tigers, but the dead leader’s son stepped forth and “took his father’s place to help protect tigers.” Elsewhere, village youth eager to contribute form Response Team ‘Juniors’.

Barlow’s confidence is warranted. The locals are already beginning clean the stains of their bloody past with the tigers—their Guardians of the Forests.

Barlow, A.C.D. et al. 2010. Use of an action-selection framework for human-carnivore conflict in the Bangladesh Sundarbans. Conservation Biology 24: 1338-1347.